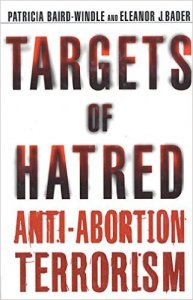 Targets of Hatred charts the development of the anti-abortion movement in North America. Beginning in the years preceding the 1973 Roe vs. Wade decision that legalized abortion, the book examines the roles played by the Catholic Church, Fundamentalist Protestants, and Republican and Democratic parties, and assesses points of overlap and divergence. The voices of more than 190 providers in the United States and Canada–clinic owners, doctors, nurses, technicians, and their families–give readers an in-depth look at what it means to work in a field in which arson, bombings, harassment, and killing are routine. Filled with dramatic, eye-witness accounts of anti-abortion terrorism, the book demonstrates law enforcement’s failure to stem the violence and is a call to arms for concerned individuals.