Beyond Choice: Reproductive Freedom in the 21st Century 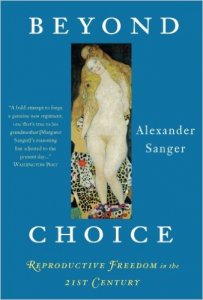 Thirty years after Roe v. Wade, the argument between “pro-choicers” and “pro-lifers” has reached stalemate. Pro-choice arguments haven’t persuaded a comfortable majority that legal abortion is vital to our society, nor addressed our moral qualms. Younger people are less and less supportive of reproductive rights. Since 1996, state legislatures have enacted nearly 300 pieces of anti-choice legislation. With Roe in jeopardy, International Planned Parenthood Council Chair Alexander Sanger asks a simple but heretical question: How many more pieces of anti-choice legislation will it take to get the pro-choice movement to rethink its approach to the issue?

In Beyond Choice, Sanger explores the history of the reproductive rights movement to discover how it got stuck in its thinking, and then provides a convincing new argument for the moral rightness of its cause. He shows why it is vital to the health and survival of the human race that couples be able to have children, or not, when they choose; why reproductive rights are just as important to men as to women; and why, in an era of new reproductive technologies, completely unfettered choice is not morally defensible.  Beyond Choice is inspiring and important reading for women’s rights advocates, opinion leaders, medical ethicists, and anyone concerned to preserve our freedom to reproduce, or not, without government intervention.